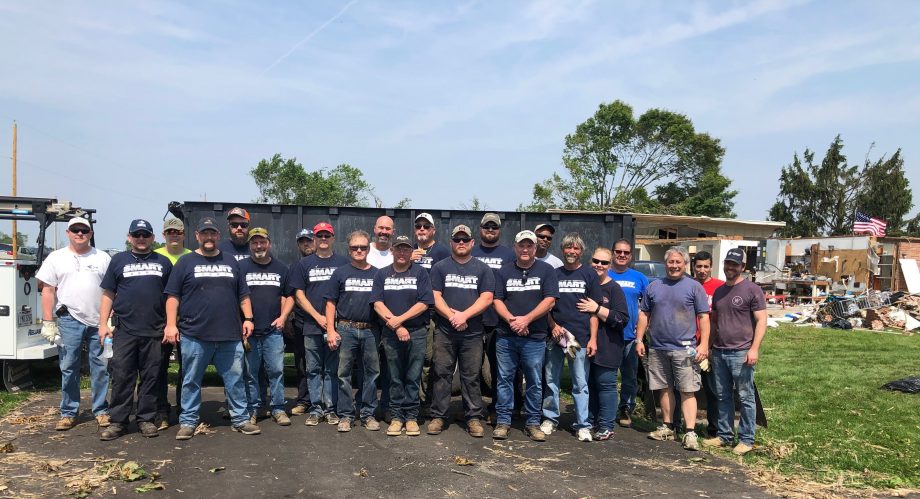 An outbreak of 15 tornadoes touched down in the Miami Valley area in late May, leaving a path
of destruction, affecting multiple communities, including the properties of some Dayton-area Sheet Metal Local 24 members. 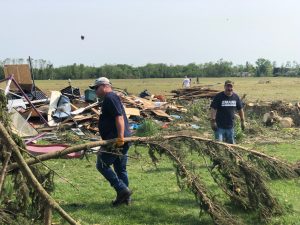 A member of SMW Local 24 helps clean up tornado debris.

Despite occurring at night, there was only one reported death. As of June 3, WHIO TV reported the injury total at 420 people.

The bulk of the twisters hit the greater Dayton area, and according to the Dayton Daily News, an estimated 415 structures sustained minor to moderate damage, while 45 were severely damaged. 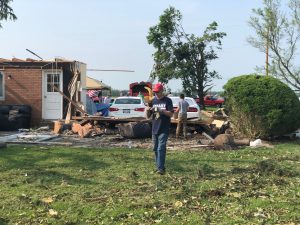 A members of Sheet Metal Workers Local 24 puts on gloves before joining the cleanup effort.

When the word got out that Brothers and Sisters were in need of help, members stepped up, including some members whose own homes and vehicles sustained some kind of damage.

In the days after the storms, Sheet Metal Local 24 members and those in other building trades were trying to gain access to the areas hardest hit to help with the cleanup.

The Dayton Building Trades established a protocol to identify areas in need and then respond by bringing needed supplies, as well as help serving meals.

Within days of the twisters hitting the area, the DBCTC began to run a relief effort out of the Iron Workers Local 290 motorcycle club building. Members from all of the affiliated trades, including Local 24, began collecting donations and cooking meals for those affected, while other volunteers help with cleanup efforts. 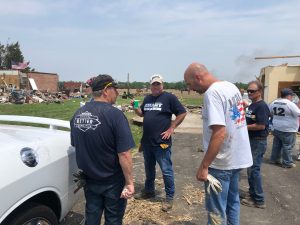 Members of the SMART Army take a break during tornado cleanup.

The effort by members to come together and help one another out can only be described as heartwarming. In a time of need, Brothers and Sisters unselfishly worked to help one another out. While the Dayton tornado outbreak showed some of the worst in nature, it brought out some of the best human qualities, helping to reinforce the bond union members have with one another.

Even some of the signatory contractors helped with cleanup by letting employees use trucks or equipment to help clear debris. Many signatories told their employees to take the time they need to take care of their particular situation.