Sheet Metal Apprentices can specialize in a number of different areas that include:

Architectural Sheet Metal
Architectural sheet metal is a combination of technical skills and artistry. The shaping of metal into useful and beautiful forms is a centuries-old craft. Architects, by the 19th century, began to use sheet metal to construct large buildings. Some of the most familiar 19th and 20th-century structures built incorporate various types of sheet metal in their designs such as:

In this field, apprentices learn the basic principles of architecture and see the role that sheet metal plays in modern structures. Most work will be outside on a construction site, where journeymen work in a challenging environment with architects, engineers, and dozens of other trade workers. Journeymen help create buildings or bridges that are both functional and beautiful. This work may also include building decoration, shaping metal to create attractive and long-lasting designs. Opportunities in this field include:

Commercial HVAC
HVAC (heating, ventilation, and air conditioning) is a field where tradesmen work on high-volume mechanical systems that deliver heated and cooled air to commercial buildings. These systems are found in almost every imaginable building including:

Apprentices will work in an exciting environment with dozens of other trade workers and will be part of creating something that is long lasting and enhances the quality of life for many people. Opportunities in this field include:

Although jobsite work is required, Sheet Metal Detailers do most of their work inside an office at a computer. Apprentices will learn about complex building systems and how those systems operate. Journeymen work with blueprints and communicate regularly with project managers, trade workers and many other people involved in the construction of buildings. Opportunities in this field include:

Industrial Sheet Metal Welding
Industrial Sheet Metal Welders work on large-scale projects; custom, one-of-a-kind projects; or large shop-built modules. The metals used in this industry can be up to one-inch thick and parts must be moved or hoisted into place using large, heavy-gauge machinery or even helicopters. In this field, Journeymen make machines used in a number of industries such as automotive assembly or food processing plants. Sheet Metal Workers design, assemble, and install the air handling systems needed in facilities requiring clean, filtered air, such as computer assembly plants or the pharmaceutical industry. Our members can work on specialized one-of-a-kind installations almost anywhere in the world. Journeymen work on construction jobsites installing large machine components or in specialized fabrication shops. These projects that will last for years and enhance the quality of life for many people, helping make this challenging work satisfying. Opportunities in this field include:
Residential HVAC
Residential HVAC technicians work on installing duct systems for builders in the housing industry. Tradesmen work in new construction for a specialized custom home builder or for high-volume builders who develop large subdivisions containing many homes. They install ductwork for a wide variety of residences including single-family homes, townhomes and apartment buildings. Work also can include the remodeling, upgrading or troubleshooting of duct systems. Most of this work is done in the field. Opportunities in this field include:
Service and Refrigeration
Demand for skilled technicians in this field is high. Apprentices going into this field will learn about heating and cooling systems designed to make buildings comfortable and safe, and refrigeration systems that prolong the life of foods and keep medicines and blood supplies at safe temperatures. Services technician work includes:

Journeymen work on a variety of job sites installing and testing systems to ensure they are operating safely and efficiently. Work can be performed in dangerous conditions, for example, during a storm. The work is exciting, challenging and will always be in demand. Opportunities in this field include:

Testing, Adjusting and Balancing
Testing, adjusting and balancing (TAB) is an important part of air and water delivery systems. TAB technicians work to ensure air and water are delivered efficiently, quietly and safely throughout a building. Journeymen are responsible for working on air and water delivery systems to meet the specifications outlined by the design engineer. Apprentices will learn all the parts of HVAC and fluid flow systems analysis and measurements to conduct the right tests, make the correct adjustments and deal with any problems. Those who like math and enjoy the idea of working on complex systems and solving problems should consider a career in TAB. Opportunities in this field include: 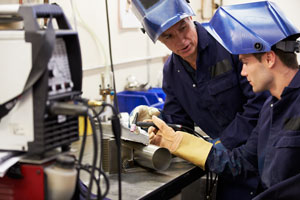