If the proposal is acted upon, it would directly benefit members of Sheet Metal Workers Local 24 members, along with other union building trades and even some non-union construction workers. It would benefit all Local 24 members working on federal projects, especially on contracts at the Wright-Patterson Air Force Base, which have been particularly prevalent.  END_OF_DOCUMENT_TOKEN_TO_BE_REPLACED

In an Aug. 27 prepared statement, NABTU said nearly 325,000 Americans told the DOL they do not support IRAPs in the construction industry. The number of submitted comments broke the previous record of 25,000 submitted on changes to overtime pay.

According to a statement on the SMART website, SMART members submitted just over 18,000 comments to the DOL, with several thousand more comments submitted by friends and family members. END_OF_DOCUMENT_TOKEN_TO_BE_REPLACED 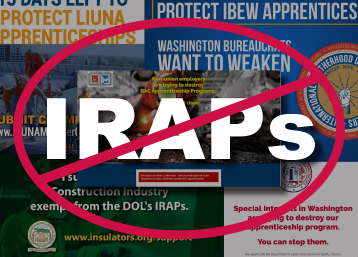 From the International level and down, unions are rallying their members to tell the U.S. Department of Labor Industry-Recognized Apprenticeship Programs, also known as IRAPs, do not belong in the construction industry.

With the potential fate of registered apprenticeships hanging in the balance, North America’s Building Trades Unions, SMART, other International Unions and are reaching out to all members and urging them to take action and comment against the implantation of IRAPs before the Aug. 26 deadline. END_OF_DOCUMENT_TOKEN_TO_BE_REPLACED