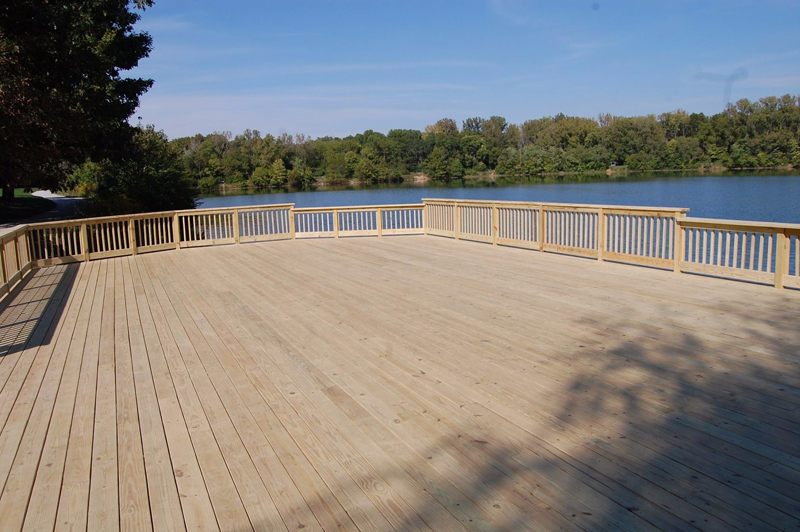 The nearly 120-acre park is surrounded by a quarried lake, which is stocked by Rainbow Trout from the Ohio Department of Natural Resources. Since swimming and boating is prohibited at Antrim Lake, anglers must fish off the 2,400 square-foot dock on the banks of the lake.

A plaque hangs at the Antrim Park Pier, thanking all unions, including Sheet Metal Workers Local 24, for renovating the fishing pier.

Fishing off the pier became compromised due to the deterioration of the existing dock, which is when the Ohio AFL-CIO and USA became involved.

According to Jeannette Mauk, Field Director for the Ohio AFL-CIO, a fundraiser is held each year in Columbus for USA and the funds raised go to a project to support the USA mission.

This year, the Ohio AFL-CIO selected the Antrim Park dock as their project and donated $15,000 raised at the USA dinner to purchase materials needed to refurbish the pier.

Volunteers from locals throughout the state, including a number of outdoorsmen who attended the fundraiser, donated their time to help rebuild the dock.

Volunteers spent more than 1,000 hours prepping and staining the wood at their Locals.

According to IUPAT Local 1275 Business Representative Joe Crytser, who helped manage the project, the wood initially came in green, which meant volunteers had to dry the wood before sanding and staining it.

“It’s a much better built deck,” said Crytser. “We’ve gotten a lot of positive compliments from the community and it was nice to see all the crafts work hand-in-hand. We built up some good comradery.”