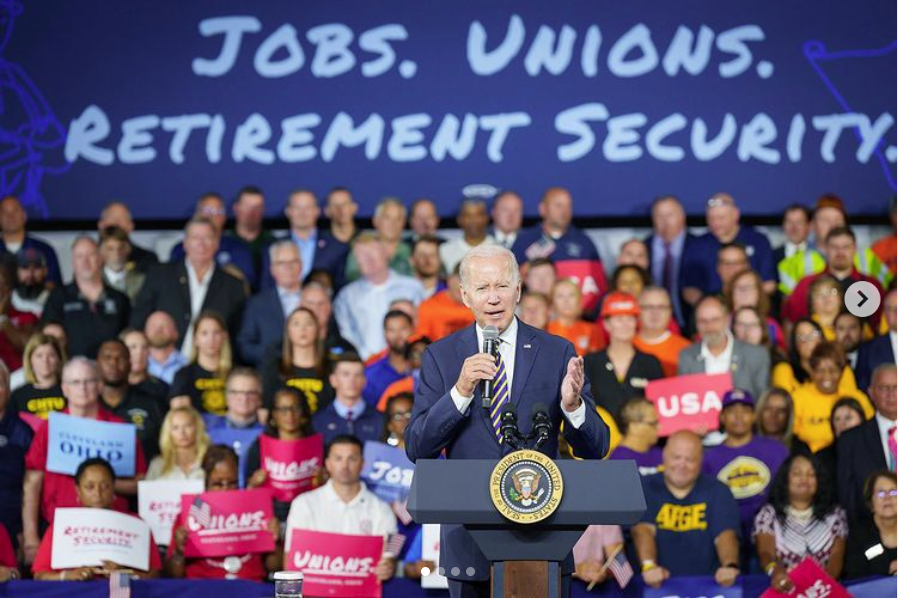 Speaking in front of a supportive crowd of union members in Cleveland, President Joe Biden touted the finalization of the rule that will save or protect the pension plans for millions of Americans, including members of SMART.

On July 7, Biden made an appearance at Max S. Hayes High School – the Cleveland vocational school built under a Project Labor Agreement by affiliated members of the Cleveland Building and Construction Trades Council – and discussed provisions to the American Rescue Plan, which will keep at-risk multi-employer pension funds solvent until at least 2051. The finalization of the rule will provide nearly $90 billion for the Pension Benefit Guarantee Corporation to ensure more than a generation of retired union members receive their full pensions.

It will keep multi-employer pension plans solvent and well-funded for 30 more years — with no cuts to earned benefits of participants and beneficiaries; restore full benefits for retirees in plans that previously had to take cuts; increase the maximum Pension Benefit Guarantee Corporation (PBGC) insurance amount; and require each plan that receives assistance to file regular status reports with the PBGC and Congressional Committees to prevent recurrence and protect retirees’ benefits.

“With today’s actions, millions of workers will have the dignified retirement they earned and they deserve,” Biden said. “Those retirees who lost their benefits will have them restored retroactively.”

The pension fix was initially introduced as the Butch Lewis Act by Sen. Sherrod Brown (D-Ohio), and Democrats eventually added the legislation into the American Rescue Plan, which was passed last year. Brown was one of several Ohio Democrats in attendance at the event. Besides Brown, Ohio Reps. Shantel Brown and Rep. Marcy Kaptur, along with Rep. Richard Neal (D-Mass.) and Labor Secretary Marty Walsh were in attendance.

“After years of work by workers and retirees and small business owners in Ohio and around the country, in the American Rescue Plan we finally saved the pensions thousands of Ohioans earned over a lifetime of work, with no cuts,” said Brown. “So many times, we wondered if we could get this done. But union workers never gave up.”

Members of the building trades, along with other union members such as the Teamsters, rely on multi-employer pension plans, which were designed to allow for multiple employers to fund one pension plan. This allows for continuity as union members in these plans may frequently change contractors or employers. For members of the union building trades, including SMART, the finalization was a significant announcement.

“This pivotal piece of the American Rescue Plan will directly aid millions of American workers, retirees and families who faced significant pension benefit cuts, as they will now receive the full benefits they worked years to accumulate,” he said. “Prior to this critical relief, over 200 plans were on pace to become insolvent. The Special Financial Assistance Program will right the ship and provide the funding needed for plan members to retire with the security and dignity they earned, while also saving American taxpayers tens of billions of dollars in lost federal tax revenue and future social safety net costs had this legislation not passed.”

McGarvey called the Special Financial Assistance Program historic and labeled it as the most significant effort to protect the solvency of the multi-employer system in nearly 50 years.

“Over the last handful of decades, many political leaders have promised to pass meaningful pension relief, but President Biden and his Administration got the job done,” he added.